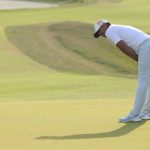 There’s no sugar-coating it: Brooks Koepka, admittedly, was bad Saturday. Except, of course, for the tiny fact that actually, he was pretty good.

On moving day of a week in which carnage has reigned supreme, the 2018 and 2019 PGA champ shot a two-under 70 to land himself alone in second place and a stroke off the lead. Koepka made three bogeys, but also added five birdies, adding his name to the short list of players who have managed to break par on the Ocean Course’s ferocious second nine. So why exactly did Koepka spend the overwhelming majority of his post-round press conference rotating between disdain and abject contempt for his execution?

“That was the worst putting performance I think I’ve ever had in my career,” Koepka said. “Can’t get much worse. I thought 70 was about the highest I could have shot today.”

As for the fix?

Koepka is notoriously gruff with the media, but Saturday was exceptionally terse — enough to warrant a deeper look into all this putting business. But a deeper look reveals — brace yourself — Koepka wasn’t half-bad with the flatstick in his hands. He gained .08 strokes to the field putting Saturday, which actually amounts to a three-quarter stroke improvement over his -.784 strokes gained putting in Friday’s second round.

The numbers evidently did little to assuage Koepka’s concerns. By his estimation, the issue was his feel, or more accurately, a concerning lack of it.

“I don’t know why I felt like I made a big enough stroke, it just maybe felt a little slow,” he said. “This putting green I think is a little faster than the greens today. I don’t know, I’ll go figure this out here shortly and bang from inside 10 feet, I’m usually banging it in the back of the cup. If it misses it’s going three, four feet by. I didn’t have any of those, so obviously it’s a speed issue and not trusting it.”

If things went poorly, his competitors surely didn’t notice. Joel Dahmen couldn’t resist the opportunity to stick a playful jab in Koepka’s side after watching the big man best him by seven strokes over the opening three rounds.

Vegas was similarly unworried about Koepka’s putting. Oddsmakers have him as the clear favorite to win Sunday at +150, even better odds than the 54-hole leader, Phil Mickelson, at +275.

Could this be another bit of Koepkian trickery? Is Brooks playing mental games, hoping to lull his opponents to sleep? Or was he truly spooked by what he saw in the putting surfaces at the Ocean Course Saturday?

In either case, his performance Saturday was proof positive that not all bad putting days are created equal. In fact, some might even leave you in the final pairing on Sunday at a major championship.

“I left a lot out there,” he said. “I’ve got a chance to win, so that’s all I wanted to do today is not give back any shots and be there tomorrow with a chance, and I’ve got that.”

Another horrible putting performance on Sunday and Koepka might just find himself holding the Wanamaker Trophy.

James Colgan is an assistant editor at GOLF, contributing stories for the website and magazine on a broad range of topics. He writes the Hot Mic, GOLF’s weekly media column, and utilizes his broadcast experience across the brand’s social media and video platforms. A 2019 graduate of Syracuse University, James — and evidently, his golf game — is still defrosting from four years in the snow, during which time he cut his teeth at NFL Films, CBS News and Fox Sports. Prior to joining GOLF, James was a caddie scholarship recipient (and astute looper) on Long Island, where he is from.

What Are Superfoods? Plus 34 of the Best Superfoods