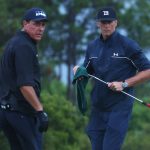 Phil Mickelson and Tom Brady have a score to settle in the next Match.

The Match is back — with plenty of star power. Two of golf’s three most recent major champs are joined by the reigning Super Bowl MVP and NFL MVP for a high-octane fourth edition of the series, as first reported by Sports Business Journal and other outlets.

The competition is set for July 6 and will air on TNT. Perhaps the most surprising twist is the course that will host them: Moonlight Basin in Big Sky, Mont. While the acclaimed course ranks No. 3 in Montana in GOLF’s latest state-by-state rankings, it’s rare for any major sporting event to take place in the Treasure State.

There’s no lack of intrigue surrounding this group. Mickelson, who has gotten more comfortable and entertaining with each Match edition, now has the recent results to match the attention paid to the event. It’s fitting that the oldest major champion in golf history will team up with the oldest Super Bowl-winning quarterback in the NFL’s history.

On the other team, DeChambeau has arguably made as many headlines as any other golfer over the course of the past year. He’ll head to Montana a couple weeks removed from his title defense at Torrey Pines. Rodgers, meanwhile, enters the summer in career limbo; he’s still under contract with the Green Bay Packers but his future is decidedly uncertain.

The choice of Moonlight Basin will make for particularly intriguing viewing because it’s a true mountain course. The Jack Nicklaus design is set at 7,500 feet altitude and features severe elevation changes throughout, including an opening tee shot that drops two hundred feet to the fairway.

Mickelson and DeChambeau may tip it out from the “Mill Creek” tees, which measure exactly 8,000 yards, but even if they do they’ll have no problem with length given the altitude. The course’s rating is 76.8 from the tips with a slope of 148.

If the competition stays close on the back nine, Moonlight Basin will feature extra intrigue with three par-3s, three par-4s and three par-5s. The most notable of those par-5s is a 777-yard par-5 (yeah, you read that right) which plays so dramatically downhill it’s actually possible the pros will reach in two.

So why Big Sky? It likely has something to do with Mickelson and Brady’s connection to the nearby Yellowstone Club, where both are members. Brady has spent plenty of his summers in Montana in the past. (The club has made recent tabloid headlines as the alleged retreat of Ben Affleck and Jennifer Lopez.)

And because the showdown is a made-for-TV exhibition, there’s no need to hold it near a major metropolitan area; the event won’t rely on ticket sales and admission is likely to be limited. Finally, holding the event on the West Coast will allow for primetime viewing. And the event will serve as a natural lead-in to the American Century Championship, a celebrity event held in Lake Tahoe later that week.

What to watch for

Mickelson has won two of the three previous editions of the event, most recently when paired up with Charles Barkley in November. Last May, he and Brady lost to the team of Peyton Manning and Tiger Woods, so they’ll be looking for redemption. Neither DeChambeau nor Rodgers have played in the series before.

TNT’s coverage will begin at 5 p.m. ET. As in previous editions of the event, players will be mic’d up the entire time and will be able to communicate with the broadcast booth while playing. We can assume they’ll take carts; Moonlight Basin isn’t super conducive to hoofing it, and the carts really helped with TV pacing.

Last year’s editions of the Match proved entertaining and fun; the series seems to be finding its sweet spot. The cast of characters is particularly intriguing this time, with the performative Mickelson, the uber-competitive Brady, the eccentric DeChambeau and the sardonic Rodgers. Legacies aren’t on the line. It’s just fun television.

Dylan Dethier is a senior writer for GOLF Magazine/GOLF.com, The Williamstown, Mass. native joined GOLF in 2017 after two years scuffling on the mini-tours. Dethier is a 2014 graduate of Williams College, where he majored in English, and he’s the author of 18 in America, which details the year he spent as an 18-year-old living from his car and playing a round of golf in every state.

Try telling Villarreal that this is a rinky-dink tournament | Soccer

Looking for Sister Spouse: Does Dannielle Have a Boyfriend?