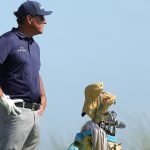 Phil Mickelson was forced to make a last-minute gear change Sunday at the PGA Championship.

Welcome to Wall-to-Wall Equipment, the Monday morning gear wrap-up in which GOLF equipment editor Jonathan Wall takes you through the latest trends, rumors and breaking news.

Figuring it out on the fly

It’s difficult to pick Phil Mickelson’s most impressive feat: Winning the PGA Championship at 50 or somehow having enough speed in the tank to crack two club faces in the span of 24 hours.

“I mean, just you can’t swing it as hard as I hit it and not expect them to crack,” Mickelson said. “I’m kidding.”

As if winning a PGA Championship at the Ocean Course wasn’t tough enough, Mickelson was forced to contend with two separate equipment issues over the weekend. The first occurred on the back nine when Mickelson flattened the face of his 11.5-degree TaylorMade Original One Mini Driver.

“I hit a couple of squirrelly shots on 12 and 13 and the face on my 2-wood flattened,” he said. “Fortunately I had a backup head and swapped it out and hit it great today.”

Problem solved — or so Mickelson thought.

The following day, a mere 15 minutes before his tee time, Mickelson’s brother (and caddie), Tim, noticed the face on his 16-degree Callaway X Forged UT had cracked as well. Unlike most solid-construction irons, Callaway’s utility club is designed to produce comparable speeds to a hybrid via a two-piece construction consisting of a thin cup face and hollow body design. In other words, the thin face has the potential to crack after repeated blows.

“It happens,” said Mickelson, who wound up replacing the club with a Callaway Mavrik Sub Zero 4-wood.

Mickelson’s odds to win the PGA Championship at the beginning of the week were 250-to-1. It’s very likely the odds of him cracking two clubs in the same weekend — and going on to win — are even higher.

While the situation wasn’t ideal, Mickelson shrugged off the cracked clubs after the win and chose to look at the silver lining.

“If [the face doesn’t crack], you start to question the manufacturer, ‘Hey, aren’t we making this as hot as we can,’” he said. “It’s certainly part of it, but fortunately, I had a 4-wood that’s a very comparable club to that 1-iron distance-wise and I was able to use that club effectively.”

There’s something about the majors that brings out the best in Justin Rose’s Axis1 Rose putter. The Englishman once again led the field in SG: Putting for the week, picking up a whopping 11.727 shots on the field with the flatstick.

Going back to the start of the 2020 season, he’s picked up just over 31 strokes on the greens in his last 18 major championship rounds.

Along with Rose’s success on the green, Axis1 is the only putter model to finish inside the top-3 in SG: Putting in the last three PGA Championships.

In an interesting development, Dustin Johnson added a second LAGP shaft to his TaylorMade equipment setup at the PGA Championship. Following his decision to add one of the company’s putter shafts to his TaylorMade TP Bandon 1 Prototype putter at the RBC Heritage, Johnson made a significant change to the shaft in his 10.5-degree SIM2 Max driver.

The 70-gram LAGP prototype driver shaft went through months of iteration before Johnson finally decided to put it in play. Few details are available on the shaft, but it’s reportedly a low torque, tip stiff product that’s in line with profiles he’s used previously.

Quick-hitters: Who said pros get everything for free? Branden Grace purchased the AutoFlex shafts in his Callaway Epic Speed driver and Mavrik Sub Zero fairway wood himself. The driver shaft alone retails for almost $800. … Sergio Garcia rejoined TaylorMade’s tour staff. …Blustery conditions forced some players to bench their high-lofted fairway woods and hybrids for long irons. Tommy Fleetwood swapped his 21-degree TaylorMade SIM2 fairway wood for a P7TW 3-iron, while Lee Westwood added a Ping i210 2-iron. … Adam Scott put a 60-degree Vokey WedgeWorks A-Grind lob wedge in play to contend with the firm conditions. The thin sole made it easier to get the wedge through the turf efficiently.

Want to overhaul your own bag for 2021? Visit the expert fitters at our sister company, True Spec Golf. For more on the latest gear news, check out our latest Fully Equipped podcast below.

Jonathan Wall is GOLF Magazine and GOLF.com’s Managing Editor for Equipment. Prior to joining the staff at the end of 2018, he spent 6 years covering equipment for the PGA Tour.

The Truth About Sprouted Grains