The Nationals’ David Layzell is on track to defy history and hold the seat of Upper Hunter for the New South Wales Coalition government in the crucial byelection.

There were still votes to tally when the counting stopped late on Saturday but the NSW Nationals leader John Barilaro was confident Layzell was going to claim victory.

“It was the whole world versus Dave Layzell and tonight the booth counts have come in and we’ve been rewarded with the support of the people and the voters of the Upper Hunter,” he said on his Facebook page.

Layzell has not claimed victory. 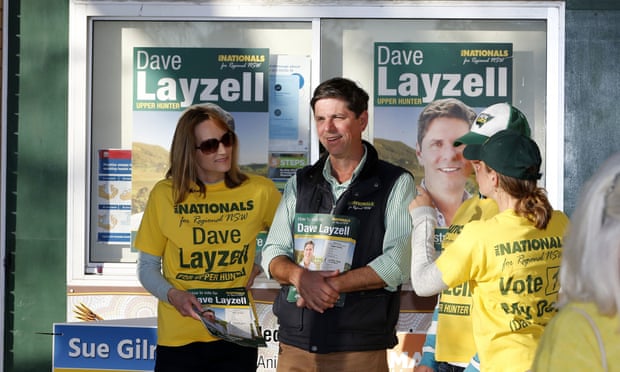 However former prime minister Malcolm Turnbull has congratulated the National party on Twitter for retaining the seat. He says it was a tribute to the great work of the NSW Liberal government through the pandemic.

Barilaro told Sky News on Sunday the result was a repudiation of the Labor party and Turnbull, who had endorsed independent candidate Kirsty O’Connell.

O’Connell, a fifth-generation farmer from near Muswellbrook, was one of the only candidates in the race calling for a moratorium on new coalmines and calling for the Hunter’s economy to diversify.

Barilaro said he’d been assisted by premier Gladys Berejiklian’s popularity. The federal government’s announcement this week that it would bankroll a new gas power plant in the Hunter was also timely, he admitted.

The major parties had been sweating on the result, which was destined either to push the Berejiklian government into minority or increase pressure on Jodi McKay as opposition leader.

Her position has been under pressure and the likely failed result could force her leadership to the brink.

The Labor leader has struggled to make any impression on voters in NSW despite the government there being beset by a string of controversies, and polling released in the final week of the campaign showed that a majority of Labor voters preferred the Coalition’s Brazilian as premier.

With more than 30,000 votes counted late on Saturday, Layzell was polling above 30% of first-preference votes, with Labor’s Jeff Drayton on 20%.

The Nationals had held the seat by 2.6% before MP Michael Johnsen’s resignation over sexual assault allegations and a sexting scandal prompted the byelection. Johnsen denies the allegations and has not been charged.

The byelection contest has centered on the future of coal mining in the region, with the Greens’ Sue Abbott wanting to move the region away from its reliance on coal.

But Labor and the Nationals have talked up their coal credentials and Labor’s Drayton is a former coalminer.

In a last-ditch appeal to voters, Drayton said he would fix years of neglect suffered under the Nationals, who have held the seat for more than 90 years.

“I’m ready to go – ready to go to Macquarie Street and fight for people of the Upper Hunter’s fair share,” he said while campaigning on Saturday.

On Sunday morning the deputy federal Labor leader, Richard Marles, played down what impact the result of the NSW Upper Hunter byelection could have on a federal poll due in the coming year.

Marles said federal Labor will have a good look at the result. “I wouldn’t be rushing to overreact to the result last night,” he told Sky News’ Sunday Agenda program. “Ultimately, the incumbent won.”

He said this was a state by-election where there were a lot more independents than there would be in a general election, which had spread the primary vote.

But Barilaro said he believe Saturday’s election set up the prime minister, Scott Morrison, to capture seats in the Hunter region.

“These seats are up for grabs, the whole lot, anything in the Hunter, on the Central Coast, in Newcastle, all that region,” he told Sky News. “I tell you what, ScoMo with his ability, the right candidates, the right policy settings, I think they can strip some seats off the Labor party.”

But Barilaro offered his Liberal colleagues a word of advice: “Don’t disrespect the National party.

“We need to fight for the bush, and there are certain policies that we must stand tall on. You support us, they can win the next election.”

What Were My Rights in the Womb? Abortion Survivors Speak

Nasa is “well on its way” to finding alien life, its boss has said. The space agency

What Were My Rights in the Womb? Abortion Survivors Speak

Nasa is “well on its way” to finding alien life, its boss has said. The space agency